I’d thought the route home would be Albuquerque–Roswell–Abilene, but it wound up being Albuquerque–Clovis–Abilene. I’d seen an ad for Abilene’s storybook sculpture garden in the copy of Texas Monthly I’d brought with me on the trip (the Hurricane Harvey issue), so I wanted to stop through there on my way home. When B makes the trip west, he always avoids Abilene (memories of a misspent youth, I reckon), so I figured this might be my only chance to visit. 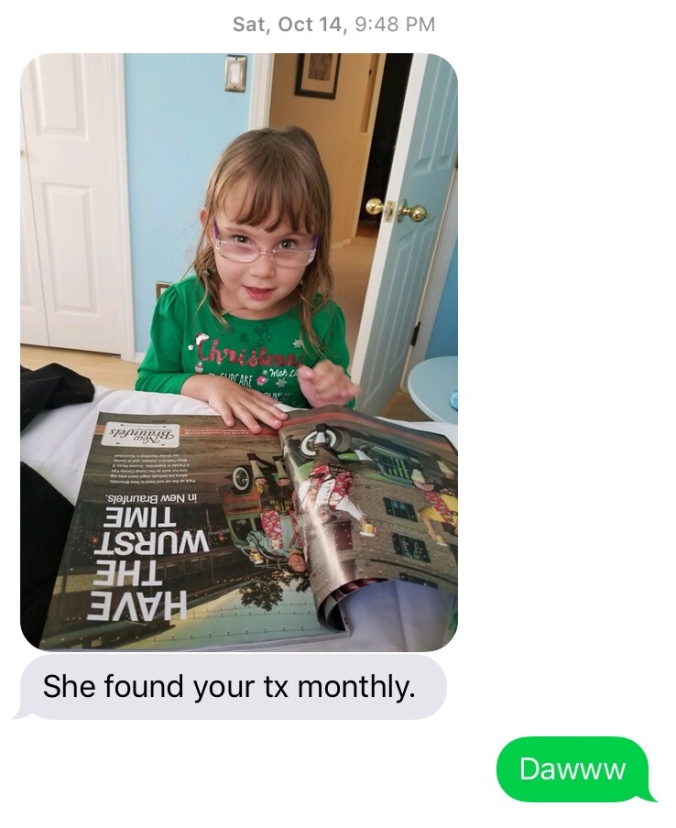 I packed, found the red rum shot glass and gifted K a bottle of salted caramel Crown Royal, intentionally left the Texas Monthly in the guest room, unintentionally left my coat, and said adios to Dude. I stopped at Durango Joe’s because I had a fond memory of them from my last visit (some sort of pecan pastry that was just heavenly) then took off for Texas. It rained, and I got a photo of the rainbow by sticking my phone through the sunroof (hey, at least it wasn’t the windshield).

I didn’t see much of Albuquerque, but stopped at the Owl Café for lunch. My rudimentary search implied some sort of Breaking Bad significance, but I also had the owl to consider. J, the friend who told me about Kittredge, had given me the owl wallet I carried on this trip (funny that K had also given me a wallet). I was extremely disappointed not to find Albuquerque Turkey on the menu but didn’t want to be the tourist who ordered off-menu, so I had plain old turkey…in Albuquerque.

It rained some more on the way out of town, and people started pulling over to the side of the road near the exit for Las Vegas (New Mexico). Since I was listening to podcasts, not terrestrial radio, I started to worry that I had missed some crucial weather warning. K had told me they didn’t have tornados, but I pulled over anyway, assuming the locals knew something I didn’t. It appeared to be just a giant storm cell, but I was relieved to exit south off of I-40 and stop for a potty/caffeine/stressed-out photo break.

I drove past the Billy the Kid museum in Fort Sumner and kept on trucking to Clovis. Around this time, I was really feeling the urge to hit up a casino (I’d done well enough to buy us all lunch on my last visit to New Mexico), but luckily, I was well off the reservation and miles beyond any legal gambling establishments at that point. I also learned, a little too late, that 2016’s Come Hell or High Water was filmed in and around Clovis. B and I had really liked this terribly Texan film and were shocked to learn it wasn’t actually filmed in Texas.

I had to detour around Lubbock and grew very irate. I was starving and the next small town’s “exit here for fast food” sign only listed McDonald’s. Yet the gastro gods smiled on me and revealed a brand new Sonic right off the ramp in Slaton. My, I was pleased to see that. 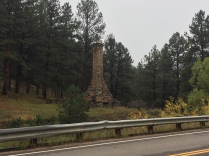 Sated, I continued on to Abilene, where I got to tour the sculpture garden under the October harvest moon. I was more excited about Halloween than usual, super into the spooky stuff (like The Shining on Audible), but I was not prepared for what happened when I peeked around the corner of the National Center for Children’s Illustrated Literature and saw…Blucifer!

What the actual hell? It’s an eight-foot exact replica of the demon horse that looms thirty-two feet over the entrance to the Denver airport. Mesteño, my ass. That’s Son of Blucifer. In a place that lured me with promises of beloved characters from children’s fiction. Abilene, why?

I recovered and tried to get a photo of the building with the car in its façade, not even seeing the dinosaur that revealed himself in photos other people had taken in daylight. This was the only time during the trip when I regretted not bringing my fancy camera, although I’m not sure I could have done much to justify the moon. 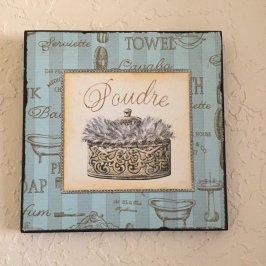 Siri took me some random way out of Abilene (I really wanted coffee; alas, all the Starbucks were behind me). Driving through a neighborhood to get back on the highway, a black cat ran across my path. I proceeded to scare myself even more as a I finished The Shining in the desolate three and a half hours it took to get home by midnight.